You are here: Home / Bruno Cooren 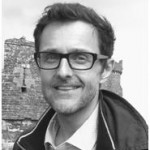 Bruno Cooren is Head of Cultural Affairs and International Relations at the City of Dunkirk, France. He holds MAs in History (University of Lille, France) and in International Relations (Sorbonne Paris I.) In 2000, he was awarded a PhD in Political Science at the University of Toronto (Canada), where he worked on the origins and nature of national sentiment. His work experiences include academic teaching, transnational cultural cooperation, and local government management at municipal and metropolitan levels. Among some of his main areas of activity are transborder regional cooperation, city-to-city international cooperation, local cultural development, and innovative local governance dynamics. He has been actively involved in the foundation of the Network of European Local Authorities for Peace in the Middle East and in the development of various transborder organisations and projects between French, Belgian and UK local stakeholders. His current interests include: bottom-up European integration; new local identities and trajectories in a global age; creative, inclusive and environmentally responsible cities; local North-South co-development; and new and reflexive forms of participatory processes and grassroot education.