You are here: Home / Kum-Kum Bhavnani 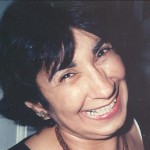 Over the course of her career she has published or co-edited a number of books, numerous articles and book chapters, and has also guest edited Special Issues of Signs and Feminism and Psychology. Her books and co-edited volumes include Talking Politics (Cambridge University Press), Feminism and ‘Race’ (Oxford University Press), Feminist Futures (Zed Press) and On the Edges of Development (Routledge). She was the Inaugural Editor for Meridians: feminism, race, transnationalism from 2000-2002 at Smith College, MA. In 2006, she premiered first feature length, award-winning documentary, The Shape of Water, her, based on her scholarly research in Senegal, Brazil, India and Jerusalem, (http://www.theshapeofwatermovie.com), narrated by Susan Sarandon. She premiered Nothing Like Chocolate in 2012 (http://nothinglikechocolate.com) and Lutah (http://www.lutah.org/lutah-a-passion-for-architecture-a-life-in-design.php) in 2014.