You are here: Home / Archives for Revolutionary Keywords

One can make a few predictions about any new book by Prof. Ian Parker. It will be intellectually daring, international in its understandings, and will draw together discourses and events often kept apart within established writing. Above all, it will not be easy to predict. Revolutionary Keywords For A New Left is no exception.

In the book, Parker acknowledges that the text is in some ways an updating of Raymond William’s classic Keywords: A Vocabulary of Culture and Society. When Williams went about charting the history of certain definitive terms within radical discourse, however, his focus was very much the white, straight, European and male. In one respect, then, the updating is necessary to introduce to such a progressive project the feminist, queer and postcolonial, yet Revolutionary Keywords is not simply tasked with returning neg 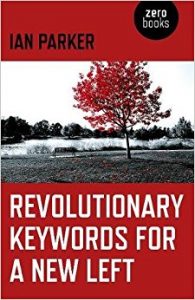 lected subjects to the discourse of the left, as through such an operation it also questions the nature of such discourse. In other words, the difficulty for Parker is not only that Williams focuses on the wrong thing, or even that his focus is not sufficiently broad, but rather that the discourse of ‘focus’ itself is at issue. Parker has written a text that, in its every aspect, problematizes a centrism that, left unchecked, can limit revolutionary possibility.

The reasons for writing the book are set out in the following terms:

‘In the past fifty years the ‘left’ has had to learn about new ways of organising itself to take on board the politics of different social movements, and that has also meant changing the way we describe what we are up against and where we are going’. (6)

The task of Revolutionary Keywords is to open up an understanding and discussion of these transformations. To achieve this end, the text rejects a conventional linear structure. Instead, fifty chapters engage with fifty keywords, some long established (‘Empire’, ‘Fascism’, ‘Discourse’), some more recent (‘Young Girl’, ‘Brexit’, ‘Cis’). The result is a text that can offer up unexpected connections. I can, for example, very much recommend  reading ‘Structurelessness’, followed by ‘Identity’ and by ‘Pabloism’: the impossibility and necessity of structure; its disavowal within Capitalism; its uncanny, disruptive effects within revolutionary thinking and practice. The text is about the meeting of ‘keywords’ in a way that results in tensions between discrete terms whilst also problematising the notion of such hard-impacted distinctions. Revolutionary Keywords is, in these terms, an example of what one chapter names the ‘Prefigurative’, producing a reading that ‘anticpate[s] the world of tomorrow’.

There is another sense in which the text works to create unexpected spaces and possibilities for thinking, with Parker, in his account of the book’s formation, writing that:

‘I noticed when an unfamiliar word appeared from the Black feminist movement, for example, and how my comrades struggled to make sense of it, and how they reframed it in their old political language. Then I would use that word in a way closer to how it was meant to operate, but instead of simply explaining it I would put it to work on a different topic. Then we could see better what uses it has, how it takes us forward in understanding what is going on, and creates alliances’ (7 – 8)

In practice, this means for example, that the chapter on ‘Discourse’ reads Foucault through the neo-liberal project of the ANC, whilst that on ‘Cis’ discusses sexuality and Ukranian identity. This is a text that does not dismiss the force of boundaries, nor the necessity of structures, but is consistently challenging and transforming what these might be, and the nature and direction of the forces upon which they call.

It is an approach exemplified in a chapter entitled ‘Postcolonial’, in which Parker skilfully brings together psychoanalysis, deconstruction, national communist party history, and neo-liberal educational projects. This chapter will be of particular interest to those familiar with The Critical Institute, as it looks to Malta as an example of how an examination of the ways in which ‘economic and cultural entit[ies are] located in relation to the history of colonialism’ can ‘enable critical reflection and resistance to local and imperial state attempts to subjugate populations and destroy the land’ (148). After contrasting various and contradictory critical moves that in some way ‘provincialise Europe’ with those that resist such a reconfiguring and difference, Parker turns to the question of Maltese education. Specifically, he discusses the all too familiar events that saw the government backing a proposal for a Jordanian non-University named the ‘American University of Malta’, one that would require the destruction of both public HE and the natural environment. Parker reads how the resistance to this monocultural, violent enterprise mobilises diversity, further suggesting that:

One aspect of postcolonial critique that is borne out by these recent attempts to recolonise Malta and by the resistance to that neoliberal exercise in cultural imperialism in the context of the global knowledge economy is that ‘postcolonial subjects’ are not only those who live inside the old colonies. Postcolonial studies describes, among other things, the way in which those at the margins often, in a way that is uncanny for those in the ‘centre’, know more about the colonisers than the colonisers themselves know. And the flip side of this is that those who refuse to be of the ‘centre’ and who make political alliances with ‘outsiders’ can all the more effectively dismantle the legacy of colonialism, anticipating the day when it really will be accurate to refer to it as something that really is ‘post’ (151-2)

Within Parker’s exacting critique, the tensions between the various discourses he introduces do not simply result in an appeal to comforting, liberal tolerance-inclusiveness. Rather, cultural and geographic ‘contradictions’ both enable Maltese resistance to certain monotheistic structures, and are also the marks of a colonial history now ‘intensified in the pursuit of profit’. Such reversals are consistently read in Revolutionary Keywords not in terms of pessimistic dead-ends, but rather the very stuff of critical and political movements. In this text, Parker proves himself once again a truly great reader of the dialectic. There is a reflexivity that actualises, rather than dilutes, the revolutionary politics. Indeed, this is a text that makes real political movement. It is a text that makes the call and opens up the possibility of going ‘forward’. Or, as Parker has it in his address to his audience:  ‘I hope you like the book and argue with it’.